FIREFIGHTERS are continuing with backburning to strengthen the containment lines of a bushfire on the western side of East Coast Road, in an area opposite to the waste transfer station, North Stradbroke Island.

A QFES spokesperson said a southerly wind change later tonight may result in smoke impacting northern parts of the island.

Residents are reminded to close windows and doors and keep their medication close by if suffering from a respiratory condition.

Safety warnings have taken on extra importance in the wake of a study released by the Australian Red Cross which found that only 18 percent of Australians had put an emergency kit together.

This is despite the survey finding that 79 per cent of the population believe it is important to be prepared for emergencies.

A QFES spokesperson said the fire was within containment lines and firefighters were continuing to backburn.

Showers were recorded in the Redlands this morning although it is unclear what impact, if any, they will have on the blaze.

BACKBURNING will continue overnight to further strengthen containment lines of a bushfire about two kilometres south of Amity Point on North Stradbroke Island.

A Redland City Council spokeswoman said there are no reported threats to people or property and the fire was well within the containment lines.

"A number of residents in the area are expected to stay at the evacuation centre at Dunwich Community Hall tonight as a precaution," she said.

THE bushfire on North Stradbroke Island is continuing to burn in inaccessible swamp and bushland west of Beehive Road and East Coast Road.

Queensland Fire and Emergency Services said it was burning within containment lines and firefighters were continuing to strengthen fire breaks and monitor the blaze.

A Redland City Council spokeswoman said the Southern Moreton Bay Island community champions had been in the evacuation centre to support the response efforts.

She said 25 residents had stayed at the evacuation centre overnight as a precaution and 10 people were at the centre on Friday morning.

There is no reported threat to life or property.

There is no impact on camp sites and the island remains open for visitors for the school holidays with holidaymakers advised there is no need to cancel their plans.

ABOUT 30 North Stradbroke Island residents attended the evacuation centre at Dunwich community hall on Thursday afternoon as a precaution as a bushfire continued to burn near Amity Point.

The spokeswoman said there was no reported threat to life or property.

"There is no impact on camp sites and the island remains open for visitors for the school holidays with holidaymakers advised there is no need to cancel their plans," she said.

"There is intermittent traffic control on East Coast Road which may cause delays however the road is still open. Council is encouraging motorists to be patient on the road and follow the instructions of traffic controllers."

More than 2000 hectares of bushland and swamp have burned since Tuesday when lightning strikes hit the island .

MORE than 30 firefighters are working to control the blaze in swampland about three kilometres from Amity Point.

A total of 18 fire appliances are involved, with waterbombing continuing, especially on the northern side of the fire.

QFES said the fire was continuing to burn through bushland west of Beehive and East Coast roads.

"This fire is burning within containment lines and firefighters will continue to strengthen fire breaks and monitor the blaze," QFES said.

Meanwhile the Redland City Council has appealed to visitors who had plans to visit North Stradbroke Island during the school holidays to keep their arrangements.

FIVE people have self-evacuated and spent a night at the Dunwich evacuation centre while a bushfire continued to burn about three kilometres south of Amity Point.

A Redland City Council spokeswoman said waterbombing would continue on Thursday, with firefighting efforts focusing on the northern side, as the fire moved in a westerly direction.

"There is currently no reported threat to life or property," the spokeswoman said.

"Suppressant gel dropped late yesterday afternoon from a large aerial tanker, a Boeing 737 brought in from New South Wales, has assisted the fire fighting efforts particularly on the southern end of the fire."

The eastern side of the fire, parallel to East Coast Road, had been controlled reducing the risk of road closures.

Backburning may be conducted on Thursday.

The spokeswoman said Energex was transporting three 500kVa generators to Amity as a contingency if the local power network is impacted.

"Residents and visitors are advised to travel carefully around the island, and particularly on East Coast Road, which runs down the middle of the island, due to smoke," she said.

"Council urges residents to stay informed and to contact triple zero (000) immediately if they believe life or property is under threat from the fire."

THE bushfire on North Stradbroke Island is moving north towards Amity Point and south towards Speedies Lane but within containment lines.

A Redland City Council spokeswoman said the city's disaster management group had been stood up as the fire continued to burn about three kilometres south of Amity.

The fire began on Tuesday night in inaccessible swampland after lightning strikes.

The spokeswoman said there were no reports of threat to life or property. 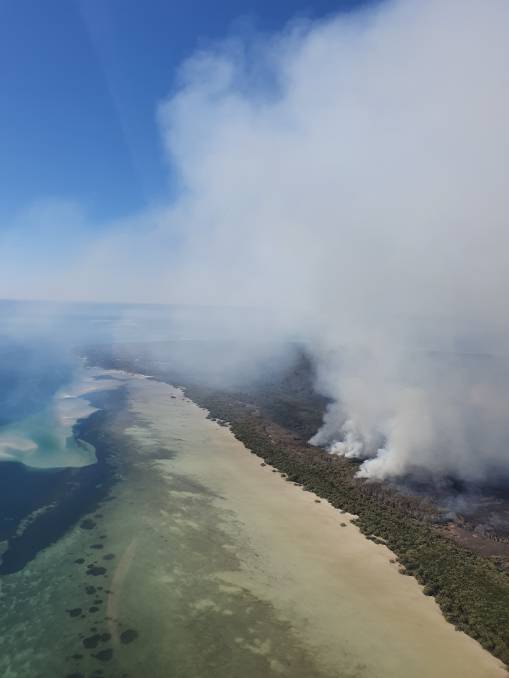 A large aerial tanker dropped a load of fire suppression gel on the southern end of the fire on Wednesday afternoon.

Extra police and SES crews have been deployed to Straddie and a Queensland Fire and Emergency Service incident management team set up at Dunwich.

Eight people who were evacuated to Dunwich Community Hall overnight had returned to family but the evacuation centre remained open as a precaution.

"Council urges residents to stay informed and to contact triple zero (000) immediately if they believe life or property is under threat from the fire," the spokeswoman said.

QFES has extended the fire ban for the Redlands to Friday, October 4.

A 737 WATER bomber is expected to help fight a bushfire on North Stradbroke Island, where three helicopters and one fixed wing plane are already dropping water.

Mr Costello said that residents living about a kilometre from the blaze had been evacuated on Tuesday night.

If the fire reached East Coast Road, it was likely that traffic between Dunwich and Amity Point and Point Lookout would have to be restricted.

There was no essential infrastructure in the path of the fire but Mr Costello said that wind direction changes could cause the fire to spread south towards Dunwich or north towards Amity Point.

The 737 water bomber was expected to target the southern edge of the fire front.

Mr Costello said that QYAC, Sibelco and Queensland Parks and Wildlife crews were trying to upgrade trails to reduce the chance of the fire jumping the tracks.

"We have machinery trying to put in further fire breaks and our cultural and heritage unit are providing information about sites that could be impacted and need to be protected," he said.

Some bee hives, part of a honey trial being run by QYAC, had been lost in the fire.

MAYOR Karen Williams has cancelled meetings in Canberra to return to the Redlands due to the bushfire on North Stradbroke Island.

Cr Williams was in Canberra with the Council of Mayors (SEQ) but is now due back on Wednesday afternoon.

She has in the meantime been in contact with the council's disaster operations team.

A Queensland Fire and Emergency Services spokeswoman said there were seven crews on scene fighting the blaze.

STRADDIE: Smoke from a bushfire in inaccessible swamp near Amity Point on North Stradbroke Island.

EIGHT people were evacuated from their homes south of Amity Point on North Stradbroke Island on Tuesday night due to the bushfire burning in inaccessible swamp.

A Redland City Council spokeswoman said the fire had a 100 metre front and was burning within containment lines, west of the old Peat Mine Track, about two kilometres south of Amity Point.

The spokeswoman said the Seven Mile residents were evacuated to the Dunwich community hall where they stayed overnight, before moving on to stay with family and friends.

"There is no current threat to life or infrastructure on the island," she said.

Extra QFES, police, SES and Council crews have travelled to North Stradbroke Island. A communications trailer has been transported to the island by QFES to help with radio and mobile phone coverage.

"Residents and visitors are advised to travel carefully on East Coast Road, which runs down the middle of the island, due to smoke," the spokeswoman said.

A QFES incident management team was being established at Dunwich.

"Council urges residents to stay informed and to contact triple zero (000) immediately if they believe life or property is under threat from the fire," the spokeswoman said.

FIREFIGHTERS are still working to contain a blaze in an inaccessible swamp area near Amity Point on North Stradbroke Island. 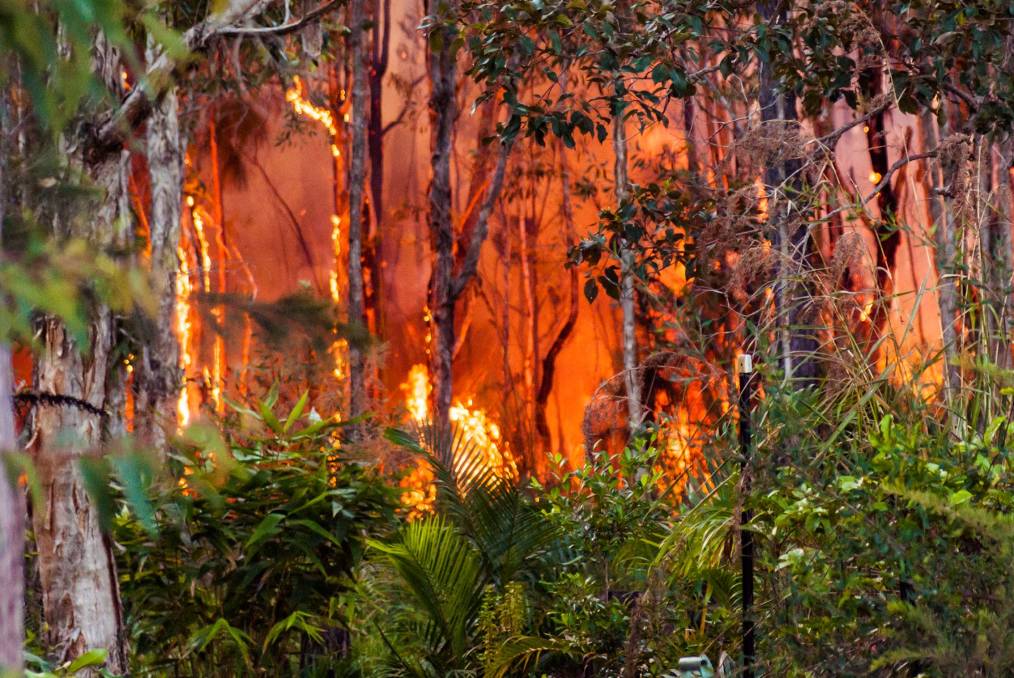 Queensland Fire and Emergency Services said the fire was about four kilometres north of East Coast Road and was posing no threat to property.

A QFES spokesperson said about 50 hectares of bushland had overnight burnt.

The fire was reported to be within containment lines.

Queensland Parks and Wildlife Service and Quandamooka Yoolooburrabee Aboriginal Corporation are on the scene, together with QFES.

Nearby areas may be affected by a smoke haze.

If affected, residents should close windows and doors and keep medications close by if suffering from a respiratory condition.

Motorists should drive with caution and to conditions.