+41
THE AFTERMATH: Hundreds of harrowing stories have emerged from the Moree flood crisis. Photos: Gareth Gardner

A WIDOW has faced her first flood alone.

It's one of hundreds of harrowing stories; of horses saved but not much else, of toddler's toys swept to a watery resting place and cracked and broken paddocks that finally sprouted hopeful green shoots swamped with water.

The fierce floodwaters that flowed through Moree when the Mehi River burst its banks last week have moved on, but as the murky pools of water dry, the silt and debris that covers everything has left a lasting mark.

ACM met with locals in the aftermath of the devastating floods.

LONG ROAD AHEAD: Farm owner Linda Maidens has "a lot" of work to do to get her property fixed up after the flood. Photo: Gareth Gardner

LINDA Maidens was proud of her lush green lawn.

The farmer owns a sprawling 28 hectare property just outside Moree, and had a sense of accomplishment brought about by coaxing her drought-stricken lawn back from the brink and watching it come alive with colour.

But on Tuesday last week, Mrs Maidens watched the floodwaters of the Mehi River creep across her property and eventually flow with force under her home, submerging her paddocks, sheds, backyard and downstairs room.

It was the first flood she has faced alone, after her husband, a lucerne farmer, died of cancer on Christmas Eve five years ago.

"Since then we have had drought and flood and it was the first flood that he wasn't here for, so it was tougher," Mrs Maidens said.

Friends converged when the flood warnings started rolling in to help move nine horses, a caravan, some power tools and other bits and pieces to higher ground, but that was all they had time for.

Mrs Maidens said the fences that kept her beloved horses in had been pushed flat by the raging river and damaged by debris.

"Last Tuesday it poured, and I mean poured, most of the day," she said.

"By the time we got the horses and the stuff out it would have been going on 7 o'clock [at night] and then the road got cut off and we couldn't lift the fridges and that.

"We left the shed about 8 o'clock to go up to the house, and we looked out at about 9 o'clock and the floodwater had just come up ... and it rose really quickly."

The road to her low-lying land was already cut off by the time an evacuation order came through, but Mrs Maiden wasn't too worried.

"We just sat upstairs and we couldn't get bread or anything, but we watched the flood."

She described the aftermath as a "shocking mess". 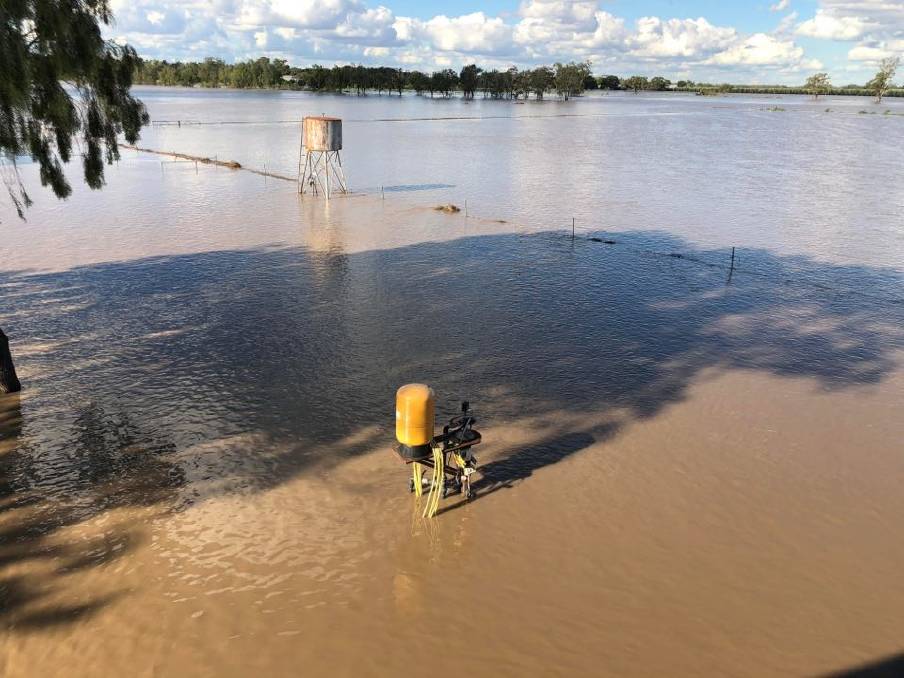 WATER VIEWS: This is what Linda Maidens saw when she stood on her second-storey balcony at the height of the floods. Photo: Linda Maidens

Her downstairs room - lived in by another family member - had to be gutted, her chickens drowned, the fences need to be redone, the piles of debris need to be burned and a semi-trailer-sized load of waterlogged furniture needs to be removed.

But, as she surveyed the paddocks, Mrs Maidens said Moree would always be home.

She said countless community groups and visitors had popped by with offers of everything from a dry paddock to pasta bake and jam drops.

"I've had so many offers of help ... the community has been awesome," she said.

"That's why I choose to live here, I love Moree." 'BUGGERED': Marlene Weribone stands with a pile of waterlogged furniture she had to get rid of after the flood in Moree. Photo: Gareth Gardner

MARLENE Weribone had just a couple of hours to get her partner, two kids and three-year-old grandchild packed up and out of the family home as floodwaters threatened north Moree last Tuesday.

They went to the evacuation centre, then on to a family member's house, where two bedrooms became a temporary home to two families.

"It was a worry, we didn't know how high the water was going to be," Ms Weribone said.

When the family returned home on Monday, they found their raised house was okay but the backyard and downstairs area had been inundated.

"It was just a lot of mud, thick mud, and all the furniture was buggered," she said. "We're getting through it, there was a lot to do."

Ms Weribone said the stench of drying mud mixed with murky water and the lurking mozzies was a constant reminder of the clean-up to come.

"It hangs around for a little while but if you hose it down and clean it out she'll be right," she said.

One street over from the Weribones, ankle deep water spilled into a block of units on the ground level.

A young mother - who asked not to be named - said her three-year-old's toys, bed and clothes were ruined in the flood.

"There was water throughout the house, the floors were all damaged and most of my furniture, the fridge and some of my clothes too," she said. "It was stressful, I didn't really know what to do."

It was the first flood the woman had ever experienced.

She said she was getting some support to get back on her feet, but hoped the evacuation would not be for "too long". A BORN and bred Moree family spanning three generations waded through knee-deep water outside their own home to start helping out their neighbours as the river rose.

Moree Rural Fire Service brigade captain Rhonda Gallagher was flanked by a team of uniformed Gallaghers, including her husband Robert, daughter Bec and grandsons, Sean and Jayden, as they tackled the huge task of coping with a major flood.

"It's just devastating and there are no words to describe it," she said earlier this week, as Moree moved into the recovery phase.

"There has been some devastation with a few [houses] but it's more with the people themselves, they have just lost that zing that they get and it's heartbreaking, it's just beat them."

Rhonda told the Leader her family and other volunteers had been working 16 to 18 hour days to get the work done. Even Jayden wrapped a plastic bag around his broken foot and set out to help.

"It's been bloody madness, that's what it's been," Rhonda said.

"We got called out at 3am last Tuesday morning and we've been going ever since ... I think it's going to take at least a month to get things back to some sort of normality."

"People are always there ... asking if you'd like a cup of tea or a scone and it's the community support that's just fantastic," she said.

Emergency service crews from different agencies across Australia headed to Moree to lend a hand.

With the long road to recovery still ahead, the Gallaghers urged people not to forget about those living west of the mountains.

This story The faces behind the floods: a broken community 'battles on' first appeared on The Northern Daily Leader.