FROM busking outside a St George supermarket to leading a group of spirited Redlands ukulele players, Jane Milward's work fundraising for the Royal Flying Doctor Service has seen her commended as a local hero.

Ms Milward, along with her group the Flying Buskers, have won the 2020 RFDS Brisbane Local Hero Award, which recognises Queenslanders who have donated their time and energy to keep the service in the air.

Ms Milward began busking with her ukulele five years ago, with the goal of raising funds for the RFDS.

Almost $12,000 later, Ms Milward and her group, the Flying Buskers, have now performed in venues across the state.

"It was at St George, outside the IGA," she said.

"I was feeling very scared but ... (my dog Perry) gave me courage. He was sitting there watching the people going by, and then he just lay down, very relaxed.

"Initially I travelled out west on my own, then I thought why don't we ask if anyone would like to come and stand on a street corner in Cleveland."

Since then, Flying Buskers have grown and the group has made a name for itself in the Redlands community.

In addition to raising vital dollars for the Service, the group have become passionate ambassadors, helping to also raise the profile of the iconic aeromedical organisation. 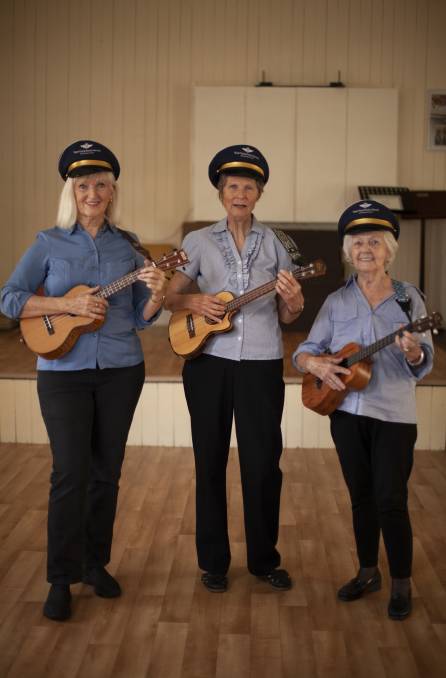 "The calibre of nominations was incredibly high. Such was the difficulty in determining just nine regional winners, we acknowledged five other nominees with special awards honouring their contribution," she said.

"On behalf of the RFDS I would like to congratulate all winners for their efforts to support the Flying Doctor. I would also like to thank every single nominee for their ongoing efforts to keep us in the air.

"We simply could not perform the work we do without the help of our supporters, so it gives me great pleasure to take this opportunity to recognise their hard work."

Ms Staib said Queenslanders were now encouraged to vote for the 2020 RFDS Local Hero Award winner for Queensland, who would win a $7,500 grant to give back to their community.

"You can learn more about each of our regional winners by viewing video packages online and then voting for the person or group which you believe should be crowned our overall winner for Queensland," she said.

Vote for the 2020 Queensland RFDS Local Hero by visiting www.rfdslocalhero.com.au/